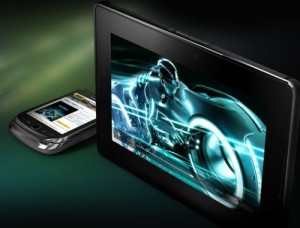 So I believe by my last posts here you may have guessed I’ve been doing lots of mobile development in the last few months.

It’s got nothing too do with work, as I do all of my mobile development on my spare time at home.

So what brought me to it?

I always felt like I was missing a big “piece of the cake” (which isn’t a lie btw) when seeing some of the people I relate to on a daily basis, talking about how cool mobile application development was.

Some things you can avoid, others you can only delay, and I know the latter was true in this case, but I was fighting really hard to let the laziness win.

Then came the Playbook, and RIM was offering to give one for each developer who successfully built and published an application for it before the launch of the device.

There was no way out this time. I love free stuff more than anything else, I’m one of those people who change their route when they know that if they pass through a certain place at a certain hour, there will be freebies being given. I queue for free bits of cheese at the supermarket *blush*.

So there I was, sitting in front of my computer with a trial copy of flash builder, and trying to make something I thought people would enjoy.

Then came the idea of building a Magic 8 Ball type thing (which later would have to be renamed and rebranded due to patent implications I wasn’t even aware of. But I’ll talk about this one on my next post).

In about 5 days and having no previous flex knowledge at all, but just some ActionScript, I had an application running on my simulator.

It was the coolest thing ever, it felt like the olden days of hacking through other people’s source code to steal get JavaScript ideas.

I then went to the pretty complicated challenging process of getting my app signed and approved.

Rim, the company behind the Playbook (and blackberry) was completely overflowed with approval requests, and it took them good 20+ days to actually get my application approved. I made the cut first time though, which made me quite proud, since it was my first appearance on the “mobile scene”.

Because it got me so excited about the whole thing, I had my second app (Time Traveller) approved even before the deadline before the launch was over. I built this very app several years ago in C, and used it a lot when I was travelling to help me get through the differences in timezones on the several countries in Europe I was going to. Except that this time, I built this one entirely using Rim’s Playbook Tablet SDK, which is optimized for the Playbook.

I then received my Playbook about 15 days after the US release, which meant I had it before it had been mentioned here in the UK. What a chick magnet that was 😉

Getting the Playbook only gave me more stamina to build my third app, so I started with Bonjour, which is a French learning application that teaches you by pronouncing the words, and encouraging you to repeat then. Pretty cool stuff IMO.

I put several hours in making sure the applications were useful and functional, and would attend the needs of all. For that reason, I made them available in 6 languages, so even if you can’t speak English, it’s very likely you will be able to speak either Spanish, Dutch, German, Portuguese, French or Italian.

You guessed right, I was very enthusiastic about the whole thing, and surely my mobile saga wouldn’t simply end here.

BUT I feel like I’ve already dragged this blog post for too long, so will continue my story on the next post, where I’ll be telling you what happened next, what patent problems I had with my Magic 8 Ball app, and what new apps I have released.

I will also talk about other markets, and what new applications I’m working on right now.